Richard Milhous Nixon, son of Francis Nixon and Hannah Milhous, would have been 99 today. 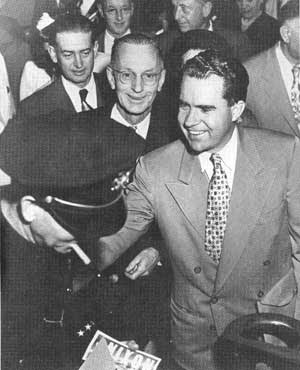 He will be remembered for many reasons, but also has one distinction among the men who have been president (besides the matter of quitting the job): He is the only person in U.S. history to have been elected both vice president and president twice: 1952, 1956, 1968 and 1972.

"I heard Nixon speak. He was talking about free enterprise, getting government off your back, lowering taxes and strengthening the military. Listening to Nixon speak sounded more like a breath of fresh air. I said to my friend, 'What party is he?' My friend said, 'He's a Republican.' I said, 'Then I am a Republican!'”

Posted by Dees Stribling at 7:13 PM

Email ThisBlogThis!Share to TwitterShare to FacebookShare to Pinterest
Labels: Nixon