Teddy Roosevelt was not the first president to ride in a motor car. His predecessor, William McKinley, seems to have done so on a few occasions. But he did so out of the public eye. There was no such reticence for President Roosevelt. The first time he rode in an automobile, August 22, 1902, he did so very much in public, while on a swing through New England ahead of the '02 mid-term elections. It was the first presidential motorcade, through Hartford, Conn. 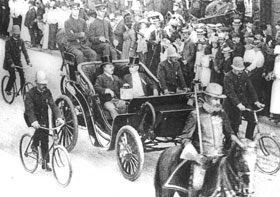 Frederic D. Schwarz writes in AmericanHeritage.com: "...his was the first time Americans witnessed a President sitting in a motorcar and waving to cheering crowds — a scene that has since taken on familiar and occasionally chilling overtones.

"The car in which Roosevelt rode was a Columbia Electric Victoria Phaeton. At this early stage in the industry’s development, about half of America’s automobiles were electric, with most of the rest running on steam and a small fraction being internal-combustion. (President McKinley’s first auto ride, back in 1899, had been in a steam-driven Locomobile piloted by its inventor, F. O. Stanley, in Washington, D.C.)

"Like other Columbia models, the Victoria Phaeton had an external box for the driver, in this case in the rear — a holdover from the days of horse-drawn carriages. It was propelled by two rear electric motors, using power stored in 20 two-volt Exide lead-acid batteries. Together the batteries weighed about 800 pounds, roughly 40 percent of the vehicle’s total weight; they were placed above the front and rear axles. The tires were solid rubber, and the chauffeur had a choice of four speeds, topping out at a blistering 13 mph, though in this case the car probably crawled along at the minimum 4 mph. It sold for $3,000, about five times the average annual wage...

"...By the end of the decade, the use of cars would be routine for Presidents. In 1907 the Secret Service bought a pair of White steam cars to carry visitors between the Oyster Bay train station and the President’s house at Sagamore Hill. In 1909, President William Howard Taft rode a Pierce-Arrow to and from his inaugural ball. From then on, automobiles became a staple of presidential appearances — though since the assassination of President John F. Kennedy in 1963, the use of open cars has been reduced considerably."

Posted by Dees Stribling at 9:18 PM

Email ThisBlogThis!Share to TwitterShare to FacebookShare to Pinterest
Labels: TR